Posted on February 8, 2013 by veganfoodpreparation

I purchased my Kefir grains from Bronwyn in Geelong (Australia). It cost me $9.00 (including post and packaging) for 2 tablespoons full. You can contact her by email at poster.321399648.OKOTH@users.gumtree.com.au or alternatively, if you live close to me, I’d be happy to share my grains with you free of charge.
For a more detailed description of the two types of Kefir and how to use them see More Information about Kefir on this blog 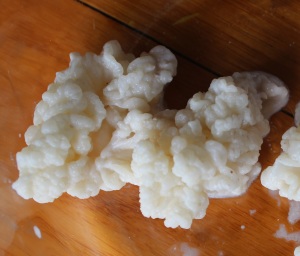 Kefir is usually made using whole, unprocessed milk, but I tried it with Almond Nut Milk purchased from the supermarket and my own Almond Nut Milk processed from raw almonds. Both turned out wonderfully after 24 hrs at room temperature. Both the milk and alternative vegan methods are exactly the same (described below).

As a way of introducing Kefir to you, if you haven’t heard of it before, this is an extract from the book “Wild Fermentation” by Sandor Ellix Katz (highly recommended)

“Kefir is distinguished from yogurt by both the method of fermentation and the types of organisms that the fermentation involves. Kefir is made with “grains,” actually colonies of yeast and bacteria that look like curds, which you strain out of the milk after fermentation, then use to start the next batch. The presence of yeast in addition to Lactobacilli gives kefir a bubbly effervescence and a small alcohol content (about 1 percent).”

“The kefir story is full of intrigue. The first kefir grains are said to have been a gift from Allah, delivered by his prophet Mohammed. The grains were treasured by the people who possessed them, passed down from generation to generation, and definitely not shared with strangers.
Early in the twentieth century, the “All-Russian Physicians’ Society” became interested in obtaining the mysterious source of this healthful drink. Since the keepers of the grains did not wish to share them, this required deception and culture thievery. The scheme involved a young Russian woman named Irina Sakharova, whom the physicians hoped would be able to charm a Caucasus prince, Bek-Mirza Barchorov, into giving her some kefir grains. He refused, she tried to leave, he had her kidnapped, she was rescued, and he was charged in the Czar’s courts. For reparations, the young woman was awarded the treasure she sought; the court ordered the prince to give her some of his cherished kefir grains. In 1908, she brought the first kefir grains to Moscow. Kefir became, and remains to this day, a popular drink in Russia. In 1973, at age 85, Irina Sakharova was formally recognized by the Soviet Ministry of Health for her role in bringing kefir to the Russian people.”

“Kefir is especially easy to make because it requires no temperature control. The hard part is coming by the grains to get started.”

METHOD:
Fill a jar with milk, no more than two-thirds full. Add kefir grains, and cap.
Leave at room temperature for 24 to 48 hours, agitating jar periodically. Milk will become bubbly, then coagulate and separate. You can remix it by shaking.
Strain out the grains with any straining implement. You may need to use a spoon or chopstick (or your clean finger) to stir and keep the strainer from clogging up with grains. Grains will grow and multiply in number over time. You only need a tablespoon (15 milliliters) or so of grains to keep your kefir going.
You can eat the extras, toss them in the compost, give them away to your friends, or use them to try culturing other things. Kefir grains are very versatile.
Enjoy your kefir, and use the grains to start another batch. Kefir can stay out at room temperature and continue to develop, or it can be refrigerated. If you tighten the lid on a jar of fermenting kefir, it will develop effervescence.

Extract from the book “Wild Fermentation” by Sandor Ellix Katz

“River has made kefir from a number of different milk alternatives, every single one of them delicious. My favorite was coconut milk kefir. It was a taste sensation, bubbly and rich and sweet and sour. All he did was add about 1 tablespoon (15 milligrams) of tara/ kefir grains to a can’s worth of coconut milk and leave it in a jar (not the can, since fermentation acids can react with metal) for a day or two at room temperature. Though kefir has traditionally been used to culture milk, the grains themselves are not animal products. They are communities of yeast and bacteria bound in a gelatinous mass chemically described as a polysaccharide. These grains can be rinsed and soaked in water, then switched to other nutritive liquids. You can kefir fruit or vegetable juice, or water with any sweetener you like, or rice milk, soymilk, or nut milk. Cranberry juice dyed the grains red, and Gatorade (!) left a neon blue stain. Whatever the medium, the grains seem to transform it, though they do not rapidly multiply as they do in milk. The process is exactly the same as kefiring milk”. Described in detail above.