It has taken some time but I’m now nearing the completion of my Aquaponic’s setup. 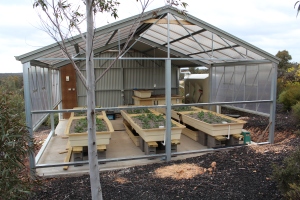 Since my last post 7 weeks ago when I introduced my first fish, the following has occurred;

1. The water, which was extremely muddy due to the clay that was mixed in with the gravel when I bought it, has now totally cleared with a combination of self filtering through the grow beds and the addition of small quantities of Alum. The Alum binds the dissolved particles and causes them to settle as sediment on the bottom of the fish tank and sumps without any distress to the fish or plants.

2. The PH, which started at 7.8 has gradually reduced to a more ideal figure of 6.8 with a combination of the occasional introduction of small quantities of vinegar and the natural tendency for it to reduce as the system matures.

3. Even though the winter temperatures have been low (max between 10 and 16 and minimum between -1 and 8) during the cycling of the system (i.e. development of the good bacteria in the grow beds), the whole process has only taken 8 weeks. Now the fish waste (mainly Ammonia) is now being converted to Nitrites and the Nitrites to Nitrates which feed the plants, as born out by the levels of Ammonia, Nitrites and Nitrates in the water samples I take on a daily basis. 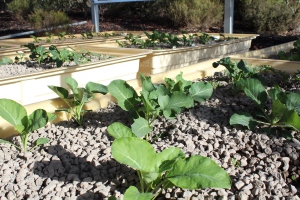 4. The plants (3 types of Kale, Cabbage, Broccoli, Cauliflower, Lettuce and Strawberries) are all looking very healthy and growing well, albeit it slowly due to the fact that the greenhouse has been open to our cold winter weather. 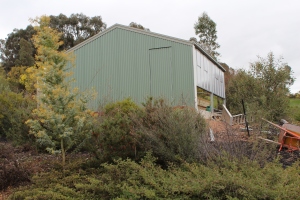 5. The greenhouse (carport structure) has now been fitted in recent days with a corrugated iron south facing wall and polycarbonate double glazed panelling on the East and West facing walls. The north is still to be clad (hopefully within the week). When complete it will have 8 self opening and closing windows and two rotating air vents in the ceiling. The self opening windows will open and close by a piston which is filled with foam that expands when the temperature rises and contracts when it declines. No electrical connection required.

6. I have introduced compost worms into each of the grow beds and these should proliferate rapidly once the temperature rises, adding worm castings that will aid in the health and growth of the plants. 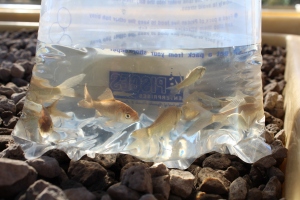 7. I have also introduced another 40 colourless goldfish, bringing the total to 106, having lost 4 of my previous brood.

Once the greenhouse is complete, both the air and water temperatures should rise to a level that will be conducive to a much increased growth in both the fish and plants.

After 8 weeks, the whole system is working like a charm and performing at the highest level of my expectations.

In December I plan to introduce Silver Perch and native Australian Catfish, which should grow from fingerling to plate size within the  year.

Much to look forward to.