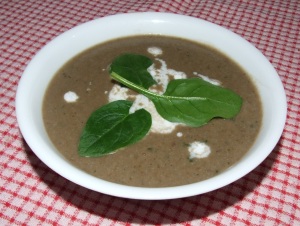 *No need to roast the fresh chestnuts, I put them in boiling water first so that they are easy to peel then just put them straight into the mix.

As the ingredients are too much to fit into the Thermomix in one preparation I cook the soup in two stages. First the Chestnut then the Cauliflower (as outlined below), then mix them together at the end.

Roughly cut carrots, celery & onion
Place in Thermomix and mince for 5 seconds on speed 4
Scrape down and add 2 tbsp of coconut oil, sauté for 10 minutes at 100 on speed soft
Add vegetable stock, and mix for 5 seconds on speed 4
Add parsley, cloves, bay leafs and chestnut puree or peeled chestnuts and cook for 30 minutes at 100 on speed soft
Remove bay leaves
Add soy milk and Blend for 1 minute by slowly going from speed 1 to speed 8
Pour into bowl, cover and set aside.

Stir Cauliflower and Chestnut mix together to finish the dish

Mince Carrot, Celery and onion
In a large soup or stock pot, sautee the carrot, celery and onion in the coconut oil for 8 to 10 minutes.
Add the vegetable broth and stir well. Add Cauliflower, parsley, cloves, bay leaves and chestnut puree or fresh chestnuts. Bring to the boil and allow to simmer, covered, for 25 minutes.
Add the flour, nutmeg and simmer for another 5 minutes.
Remove bay leaves
Add the soymilk and puree the soup in a blender in small batches.